Shawn, just thought you would like to know that the article you wrote for me/with me in DEEP Surf Magazine, in which you reviewed my “5 Feet of Fury” futuristic surfboard in your Board Trachting column, has been a great success….I’ve had 32+ surfboard orders of this surfboard directly related to the article since the release in May [2013] just two months ago.  I’m not only super stoked, but freaking out over how much work I now have in front of me.  Thanks!  Jeff Scardine, whomeboards.com 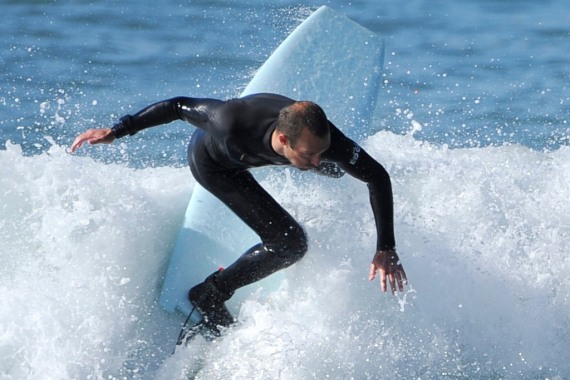 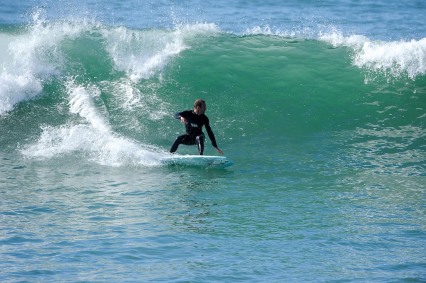 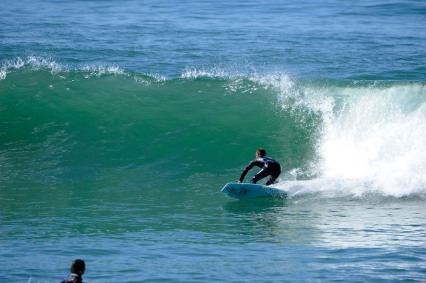 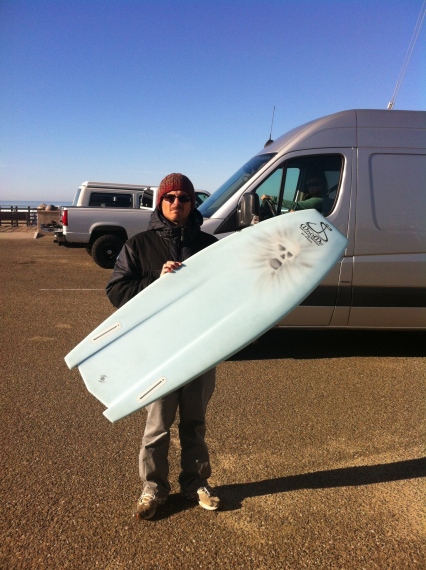 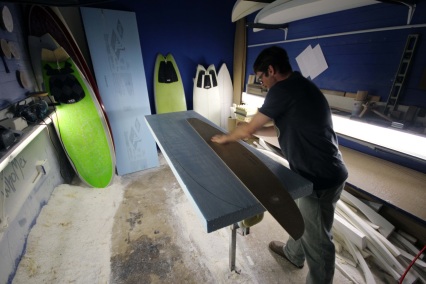 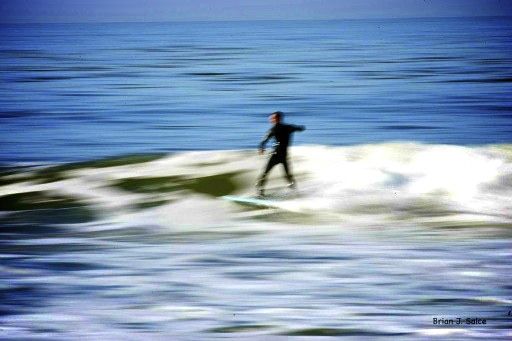 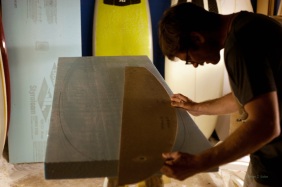 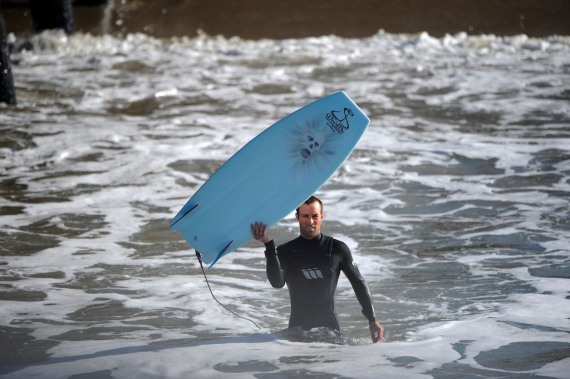 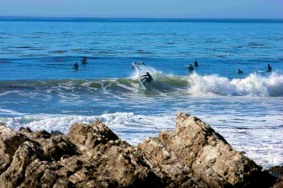 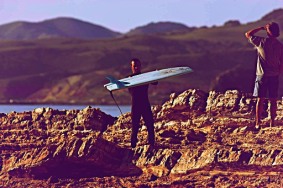 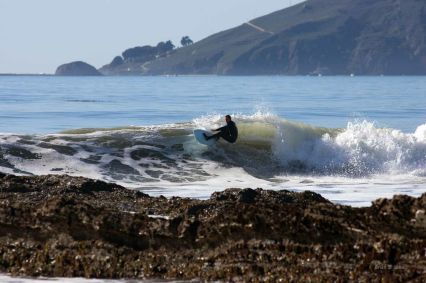 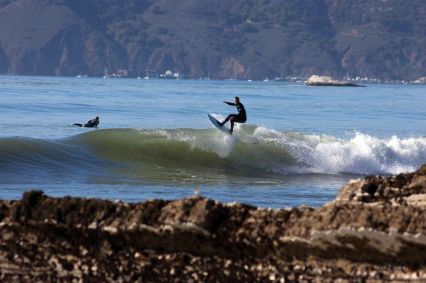 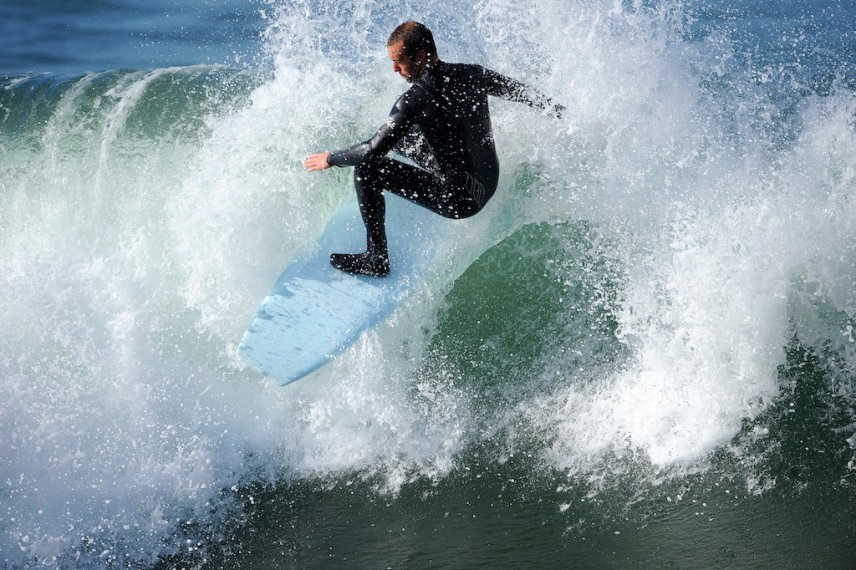 “The Displacement Sled” aka The 5’ of Fury!
Shaped by WhoMe Surfboards

By The Surfwanderer: Shawn Tracht

Intro: Be afraid! Be outright terrified! “The Displacement Sled,” a.ka. “The Five Feet of Fury,” by Jeff Scardine, is a postmodern wave riding vehicle that does nothing less than torque minds of fellow surfers into a warping helix of absurd complex thought! It’s a board that literally, when it’s handed to you to ride, will scare the bajebas out of you. Not only is the board Jeff gave me only 5ft! It’s also got a blunt nose and a wide, weird tail outline, and it’s a twin fin…sometimes!

Now I’ve ridden a plethora of twinnies in my day, and I love them. Yet I’ve never rode a twin fin that surfed equally as fundamentally radical as a finless board too! If you love surfing with with missile-like speed and aren’t afraid of this boards sinister new age hair cut, you are in for a treat that I can liken to receiving a full size candy bar from the raddest haunted house on halloween; it’s scary as all h#ll, but the rush of the ride keeps you going back for more to feed what will become an obsessive addiction!

Shaper’s Take:
Let me start by saying that the “5’ of CRAZY” is called this name because one
who shapes it would have to be considered crazy to try and put all of these
elements together and make them assist each other. The overall outline of the board resembles the overall outline of a Jon boat, which, correspondingly, has little to no rocker at all. Moreover, the front nose entry of the board has somewhat of a spoon element of the displacement hull.

The front end of the board, very displacement-esque, transitions on the rail to a more Jon boat like feeling, near the back of the board. Displacement hulls hold in the water, which keeps this board constant in the water, meaning it holds in bigger surf, it turns, it carves, and it bottom turns. However, when you want to, you can release the board from stick and make it slide around because of the Jon boat outline.

Surfer’s Take:
Flat equals fast, straight lines equal fast, parallel straight rail lines equal fast, and lift equals fast. Now I know that the mad-scientist, Scardine, who created this board, ran all of his mathematical geometric calculations to come up with a some perfect combination of all these elements; however, for me, the surfer, I just know it hauls a$$! The board, in essence, was like a 5’10” shortboard (my normal shortboard length) with the nose cut off and a post modern tail job. Yet where a 5’10” shortboard would be more narrow because the overall volume is in length, this displacement sled carried it’s volume in the belly of the board between my feet, which is where most of the action for generating and carrying speed takes place anyway. All that speed just gave me more opportunity to make more high-performance decisions on the wave, enabling faster cutbacks, more swooping turns, and way quicker get-up-and-go than a standard shortboard that is full of rocker (which helps a board turn quicker but slows it down).

I didn’t need a ton of rocker in this board to help it turn quickly and perform because the decreased length created a very similar feeling. Less board with a tiny amount of rocker, was like having rocker, kind of, however, less board with increased volume between my feet meant an overall faster, smoother ride.

Even though this board is the ultimate small wave board, the most interesting part of the board was the way it could hold in and not slide out on overhead waves…as a twin fin! Surfing overhead waves is about getting in early, setting a strong, clean rail line, and making sure your board doesn’t slide or skip out from under you on serious bottom turns. Because the board was so fast, because of the straight rail lines, it enabled me to get the bottom of the wave much sooner than on a shortboard. I would draw out my turns more then, like on a keel fin fish, and carve back up to the curl with a fully engaged rail of smooth speed. At the top of the critical section, the sky became the limit with only five feet of board underneath me: carves, slashes, roundhouse pocket cutbacks, tail blows, and even a couple little airs.

I had a mix of absolute rippers test ride this board as well as intermediate surfers. They all were very skeptical when they grabbed the 5’ of Fury from me with. Each surfer would assess the board with a ruthless, wretched eye, yet squealed like high school girls with uncanny stoke when they tried to describe the speed they had just felt under their feet after one wave. They all agreed in the end, this board is not a risk…it’s the future.

Still not sure? Go visit Shell Beach Surf Shop while there are still a few in stock and feel this board up for yourself!

Stats:
Shaper: Jeff Scardine, WhoMe Surfboards
Board Shape/Design: “5 Feet of Fury” or “The Sled”
How to Order: Order 10-12 inches shorter than your normal shortboard
Fins: Any sized twin fins imaginable, or finless!
Board’s Specialty: Small to Medium sized waves, missile-like take offs, smooth lightening glide, long arching cutbacks, airs, 360-mania, lay backs, and on and on and on…
This Board is Perfect For: Progressive-minded surfers. You won’t be taking a risk if you purchase this board, you’ll just be taking the toll way to get where you want to go on a wave faster!
Surfboard Tester, Shawn Tracht’s Normal Shortboard: 5’10 x 18 x 2
Tracht Ordered This Board: 5’0 x 20 x 2
Shaper’s Contact Info:
Website: whomeboards.com
Email: jeff@whomeboards.com
Shop’s Carrying WhoMe Boards: Shell Beach Surf Shop
Deep Magazine Digital Version: See pages 28-29 at the link below   http://content.yudu.com/Library/A26bg8/DEEPSurfMagazineVolu/resources/index.htm?referrerUrl=http%3A%2F%2Ffree.yudu.com%2Fitem%2Fdetails%2F890480%2FDEEP-Surf-Magazine_Volume-8_Issue-3_May-June-2013b