There’s a long history that goes along with fins, starting without a fin at all. That being said, variation comes from the idea of progressing surfing based on the moods each individual is trying to soothe. All in all, fins do make a huge difference, changing not only the way a board rides, but sometimes whether or not you’ll like a board at all. As an anecdote to finding my favorite template, it was important to try out different fins on my home break. This gave me a point of reference, wherein if I knew my wave, then I could really assess the differences happening under my feet.

Lastly, for the ultimate board to test fins, we suggest “The Nickel,” by MDS Surfboards, in the picture above. The reason being, if you look closely, it has a single fin box for the center fin. This allows you to surf this board with more fin set-ups than imaginable: as a single fin, small single fin with side bites, a twin fin, a twin fin with a trailer fin, and every tri set-up out there as well, wherein you can change the center fin sizes too!

A modern-day quiver consists of a tri-fin, quad-fin, and a nearly finless surfboard.

Finless: Edgy. From the Ancient Hawaiian Olo finless, sixteen foot surfboards, to the alaias, to recent progressions in foam and fiberglass finless surfboards, one thing remains the key element of design in finless boards, and that is the rail edge. Yes, the bottom contours play a major factor in the variation of the feel of each finless board, but the boards most intricate part is the edge design.
Single Fins: The Rudder. Where as a quad-fin set-up is built to help the surfer generate his/her own speed, the single fin is just the opposite. It’s rather, more of a rudder for directional turning than a motor. When you try to pump down the line on a single fin, nothing happens. This fin is best suited for pocket surfing, and correspondingly, surfing a single fin can make you a better surfer because it will teach you to surf closer to the curl, enabling you to realize the sweet spot/speed pocket of a waves.
Keel Fins/Twin Fins: Full Rail Sail. Smooth, long, carving, drawn out turns along your entire rail describe the twin fin set up. Twin fins are stiff down the line creating great drive. Compared to their step-brother, the quad fin, these fins do not release with small, quick, choppy tweaks of the ankles. Rather, these fins make a surfer flow deep through turns with classic style. But don’t be fooled, the twin fin is built for speed. If a quad were compared to first gear on a car, a twin fin could be compared to fifth.
Tri-fin/Thruster: The Performer. More or less, today’s pros at the highest level of surfing are riding the thruster. Fast, nimble, and full of a plethora of options, the tri-fin is king. You have the drive of three fins, coupled with the hold of a center fin, and the release of smaller outside fins in comparison to a big twin fin.
Quads: The Motor. As far as I’ve found, adding a fourth fin is like add a nitrous booster to your rig. Speed is the number one key in surfing, which is why I personally push surfers who are serious about improving, but have problems generating speed, to get a quad under their feet as soon as possible. I’ve seen this fin set-up thrust pretty good surfers to a whole new level in just one season because having more speed has enabled them better surfing potential.

Five Fins..aka:Quad + Nubster fifth Center fin: The Motor + etc. power button. Riding a five finned board, when you use Sean Mattison’s Nubster fin, aka, the guitar pick, is like, basically, just riding your same quad…except, at the bottom looking up towards the lip, your board has an enhanced grip which also then turns into enhanced drive.  However, the biggest stoker about using the nubster fifth fin is that it’s so short in height, that when you are hitting the lip (and remember you’re on a quad with a small enhancer), the center fin is so small that it doesn’t create drag, and it doesn’t get caught up in the lip because it’s so small.   So as far as busting the tail loose for those fins free turns, the Quad + nubster fin gives you more drive off the bottom and almost the same quad set-up, no center fin drag feeling that allows the board to release the tail and waft fins free turns off the top.

Seven Finners:  The Railroad Track.  Seven fins can mean anything.  In reality, putting fins on any board, in relation to the amount of drive, release, speed, and drag they create apply’s directly to how big, wide, and high they are off the board.  That being said, the seven fin board I’ve ridden from Von Sol’s Sean Mattison was a twinzer set-up on the outside (which totals 4 fins) with three nubster fins through the middle.  So in theory, when thinking about how a seven finner would ride in comparison to something like, let’s say, a finless board, basic theory would help us see that finless boards are faster because there is absolutely no drag from the fins.  That being said, with seven fins, they way I rode mine, there was a lot of “fins” in the water, but because of the small inside 5 fins, there wasn’t necessarily much total “fin” in the water.  This board rode like a train on track.  It was a high speed rail liner, but was meant to be ridden on rail, with long arching turns like a keel fin twin.  Yet whereas keel fins have a wide base and a ton of hold, the twinzer set-up and small nubsters actually slide out very easily because of their decreased total volume in base, width, and height.  So you could surf very fast on the rail line of this train, and then spin three-sixties and slide the tail out in the pocket because many of the fins were small, and would slide out when torqued hard. 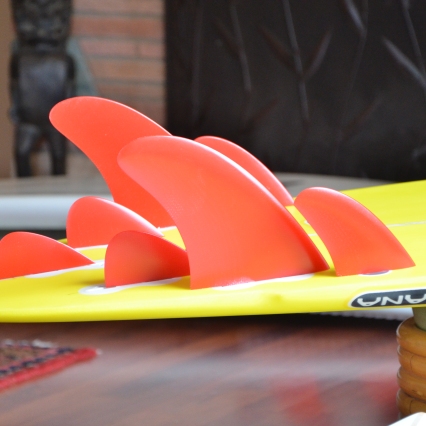 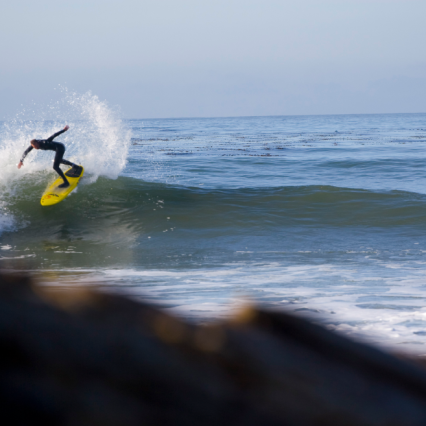 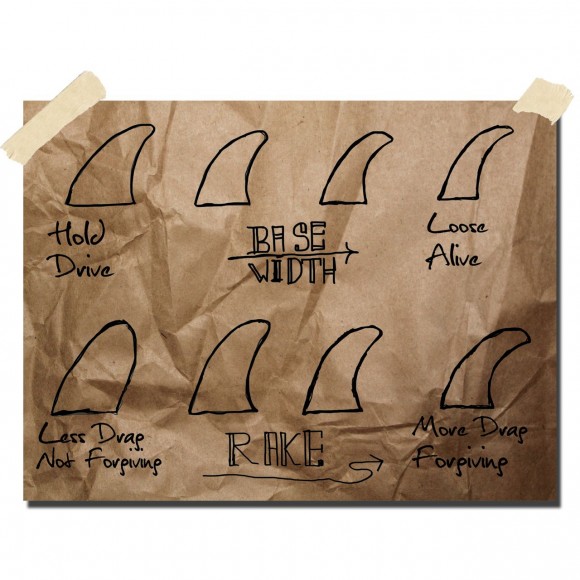 What the Manufactures are Saying…
Why are there so many different fins?
Tyler Callaway of FCS: When you think about the amount of surface area of the board that’s actually in the water when you are turning, and then you think about three or four fins protruding downwards at a right angle, you can quickly understand how much the shape, foil, and flex pattern of a fin affects the performance of the board. Slight variations are quite noticeable in performance.
Chuck Ames From True Ames: You could say there are so many fins today because there are so many different kinds of boards! It comes down to the feel. Pick a board/fin combination for the “mood” of the session.
Jeff James from Futures Fins: There are three dimensions to a fin; Template, Flex, and Foil. As you start to pair these dimensions together, you start to get a different attitude and feel on different boards and different conditions. This means that a 140 lb surfer might actually have three different favorite sets of fins. For example, he might like the F4 Blackstix in small surf, the F4 Techflex in hollow surf, and the AM1 glass in big surf. The Futures Fin Tree, [which is a demo rack in stores], is absolutely the best way to find the perfect fins for you. Take the info we give in the catalog and online and then go test, try, and enjoy.

Fins anyone? Tracht’s Quiver Last Year for the Evolution of Revolution Article

How have your fins evolved?
TC: Over the years we’ve learned a lot about foil, and especially the leading edge of the fin. Different combinations of materials to create flex where you want it (at the tip) and stiffness where you want that (at the base). We have learned a lot about how to engineer a fin to specifically affect certain aspects of performance. We have found ways to make them partially from recycled carpet without compromising performance, and you will see our green flex fins coming standard on many boards later this year.
CA: Our fins have evolved in so many ways! Design, technology, and experience are the drivers of Evolution! Our mission from the beginning (1979) was to build a better fin. By working with the best people we have delivered the best fins. Way too many names to give credit here! I must say the [Central Coast] has been a hot bed of evolution, no lack of talent around here!!
GJ: The Solus is a really good example of learning from the different things we have tried over the years. The Solus’ 3D shape and refined construction build on what we learned from the V2 and Scimitar as well as what we have learned from the materials that we used over the years. The result is a balanced fin that is capable of producing a lot of drive along with a flex that is vibrant and lively. We have the ability to dream up a fin, shape it and produce a prototype to surf all in a matter of hours under one roof in Huntington Beach. With this ability, it gives us the freedom to do a lot of designs, some bad and some good, so that we can constantly evolve our designs. 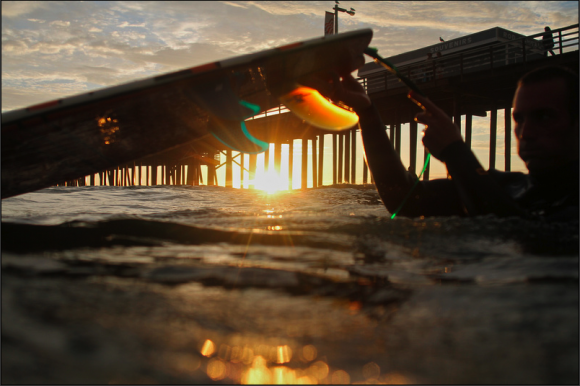 Check out this Fin set up. It’s the same board as the 1st picture. If you’re serious about learning about fins, have Matt Sparks from MDS Surfboards make you a board like this, with FCS on the outside, and a single fin box on the inside. Photo: Pfost

What is the future of fins? Your fins?
TC: It’s hard to predict what the next big performance breakthrough will be. Certainly using more and more space-age materials allows us to engineer fins that perform better.
CA: Lately we have been involved with kite racing in the San Francisco bay and have made some spectacular advances through fin design. I like to make fins that travel at higher speeds. All of the elements of design are more critical.
GJ: We have been developing better and better ways of quantifying flex and designing ways to take advantage of flex. Another key is determining how the foils of the fin work while the fin flexes and twists. I am confident that the future of fins is headed right where Futures is pointed.